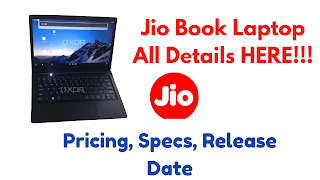 Hey Master Readers, Hope you guys would be enjoying our Loot Tricks & Free Recharge Tricks. In 2016, Jio came with free unlimited calling, free 4g unlimited data and a lot more amazon facilities for its users after which it became the largest telecom operator in India.

Then it came with its amazing Jio Phone which had fabulous features and made the internet affordable for every person and Digital India too. It soon fired the whole phone market industry. After that, the high speed Jio Fibre came which provides fast internet at a very low cost and soon it also came on top.

But now, Rumours are spreading that Jio is going to launch the JioBook Laptop. In this article, you will get all the information related to the JioBook such as the JioBook Release Date, JioBook Online Booking, and the JioBook Price.

Recently, News is coming that very soon, Jio is gonna launch its own Laptop which was much awaited before too like the Jio Fiber. The news spread in 2018 when they said that they are currently working on a low cost Laptop which will be totally Affordable for everyone. Expectations are that Jio will also include its 4G LTE Services in it which is an amazing point for this laptop. They may launch the laptop with cellular connectivity.

Some images related to JioBook hint at its look and features. Maybe, Reliance would launch the JioBook at the end of 2021 if it's ready and everything goes perfectly fine.

Rumours have also surfaced that this Laptop is gonna have its own OS or Operating System called JioOS which will be mostly based on Android for best functionality of the Laptop and easy & clean UI.

So the history may continue, and it may launch the JioBook this year on June 24 which will be held on June 24 virtually which will be streamed on YouTube too. So the JioBook will probably be announced in June 2021. Along with this we can get many other news such as the JioPhone3, Jio 5G and a lot more amazing stuff we can expect.

According to tech news site XDA, Jio is going to partner with Bluebank Communications to develop this Laptop.

This Laptop will also have by default Jio Apps such as Jio Tv, Jio Cinema, My Jio etc. It may also support all Microsoft Office apps for the users. It will also support modern Wi-Fi and Bluetooth for fast & easy connectivity.

As this is a Budget Friendly and Low-Cost Affordable Laptop the expected price is in between Rs. 9999/- to Rs. 14999/-. Jio has always been providing high quality services at low cost rates whether it is JIo Fiber, HIgh Speed 4G Internet or the Jio Phone, JioFi all its history says. All of its devices have very low prices. Some welcome offers may also apply to this Laptop’s Pricing making it at discounted price for users.

As this is a budget friendly laptop it may have Jio’s own apps too such as JioCinema, JioSaavn, Jio TV, My Jio, Jio Call etc. This price is very low & good compared to other Laptops in the Industry.

As soon as the JioBook is officially launched you can book the Laptop online at the official website of JIo at Jio.com. As I told you above, the AGM is going to be held on 24 June virtually so we can expect this product to come up.  You can also book from retail stores of Jio such as Jio Mini. Once launched, it will be available very soon on Jio Stores too.

You don’t need to go anywhere, as soon as it is launched we will post a new article on guide  on how to book pre book jio books online?. Like other Jio products it may also be available on other e-commerce giants such as Amazon, Croma, Tata Cliq, Flipkart etc.

As stated above the Jiobook is expected to release this month on June 24 at the Reliance Annual General Meeting.  As soon as they are launched they will be available to purchase at around September 2021 approximately.

It may have two prices of two different variants one with Rs. 9999 and another with Rs. 14999.  The price will be budget friendly and will be at very low cost with much higher services as the history of the Jio Shows based on its previous products.

You can book it online as soon as it is launched at the official jio website or other jio retailers website and sometime later at ecommerce sites such as Amazon, Flipkart etc.

Q. Will it have its Own OS?

Yes, some rumours state that it will have its own OS known as Jio OS which will be based on Android OS. It will have 4G LTE Support. It will contain all jio apps by default and may also support some microsoft apps. Like the JioPhone had its own Kai OS, this laptop may also have its own OS.

According to me, It is a good budget friendly laptop and as the Jio history reminds us this product will also impress its users with its amazing features & specs. It is good for small jobs, office work or student study etc.

So That’s all for this post. The above information is not official, it's just related to some rumours and expectations of the users. Till Now, there is no official announcement related to the JioBook by Reliance Jio. We can expect it on JUne 24 in Reliance AGM.

If any news comes, I will update this post or post a new article related to announcement of the Jio Book.